I have spent over $800 of my personal money on books for my classroom. A few friends have sent over books, which I am eternally gratefully, but one of the problems is balancing buying copies for whole class (10-20 copies), book clubs (3-5 copies), and independent books (1 is fine- more is cool too!) And, before you ask, my principal told me there was no money until the end of the school year, and all evidence in the room points to maybe purchasing 2 class sets a year at most. 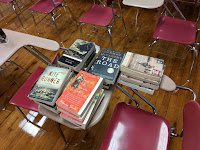 I know that a problem I have right now is that a lot of the diversity I have (authors of color and women, characters of color, books written in the last 50 years, LGBTQ characters), lives in the book club and independent world. I'm hoping that there will be kids who love an independent book enough to want to make it into a whole class book- which I'm cool with, I just have had genuine trouble finding enough copies to make a class set or, honestly, to justify the cost. I just can't get wholesale prices for many of the more recent books. 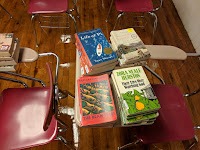 And yet....sitting in my classroom currently are class sets of "Divergent" and "Hunger Games"- both totally great books, but I question whether they are meaty enough to warrant having a whole class slog through them (never mind recent movie adaptations). But...at some point recently, the school purchased them. 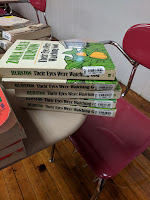 Which leads me to a conversation with my bestie.....the biggest thing I've been thinking about lately is that incredibly complicated, and politically and morally, fraught choice of text choices. (Wow-am I ever overthinking this....but that's genuinely how it feels!) So, of course I talked to my best friend about it. He loves books, reads a lot of YA books, and frankly- has great tastes. I told him that one of the challenges I was thinking about was picking between "The Scarlet Letter" (have read- loved) and "The Crucible" (haven't read). And he said something that stabbed me in the heart....

"The AP class at [REDACTED-the high school we both went to] read both. We didn't read both because we weren't supposed to go to college."

I had thought a lot this summer about how text selections communicate the value of different identities. Students deserve to see themselves in the authors and characters we read about, and not as flat, side-kicked, or evil characters- but as the richly, fully human, types they truly are. And also....students deserve to have texts put in front of them that communicate my full belief that they will conquer college level texts one day.

So, I went home from having lunch with my bestie, and I went over to Thriftbooks and spent $90 on 20 copies of "The Crucible" and 10 (more) copies of "The Scarlet Letter."

I know their is a lot of need in a lot of corners in the world....but if you would like to help support my quest to provide rich and varied texts to my students, I'd appreciate it- and so will my students! https://www.amazon.com/hz/wishlist/ls/CFNUZ97C7KU2?&sort=default