Religion in America is stunningly complex. My experiences with religion, especially in the last few years, is a reflection of this nationwide complexity. I'm not even sure how to begin to talk about it, honestly. Some people even say religion in America is dying out. However, just check out the news story above.
Do I believe the story above? Not exactly; after all, this family is selling a book, gaining publicity, and commercializing an experience that simply can not be proven because it is religious in nature. However, that's not to say that this kid did not have a legitimate religious experience.
Should we write books (and blog posts) about our individual experiences? YES, I think people should examine their own beliefs more often. Should we go on morning talk shows to talk about these experiences? Well...probably, but.... Should we make money off of our experiences? Oh dear.... Folks have to make a living, but it makes me really uncomfortable that someone might make a buck off of something that is ultimately intangible.
What are your thoughts? Should people make money off of their religious experiences? What do you think about this kid and this book? The Amazon reviews are fascinating; why would people get so upset when someone else has a different idea of the afterlife?
at March 24, 2011 4 comments: 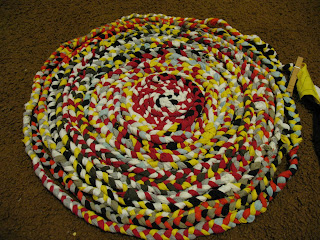 Oh, dear. ^_^
I am really bad at completing daily tasks more complicated than showering or feeding my turtle. But, I'm still going to trudge ahead in this challenge, despite evidence of failure.
So, what have I been up to in the last few days? Staying up way too late, taking long walks, battling the tendency of the Universe to collapse into chaos....
What's that you say, Lassie? The Universe isn't chaotic! There's order in the chaos! If there isn't order, well, humans just don't have the perspective to see it!
But if the Universe is anything like my bedroom, it tends towards chaos. If the Universe is anything like my kitchen, it tends towards rotting, stinky, chaos.
However, I'm in control (sorta) of those spaces, and I am not the force behind the Universe. Which leads us to the inevitable question: what (do I think) controls the Universe?
And THAT is THE question. However: Alas, its almost midnight! I might turn into a pumpkin! Good night, all!
at March 17, 2011 No comments:

Well, I'm back at college. I'm trying really hard to focus on that fact, because I have papers to write and friends to bond with while I can. However, I also have hundreds of pages of TFA materials to read, background check paperwork to fill out, and a cold dripping out of my sinus cavity.
But, that's kind of how I love to live my life (minus the mucus, of course). I like to stay ridiculously busy; I like to plan years in advance, and then GO GO GO! However, once my body and mind is in motion, it's a beast to stop. Actually, it kinda hurts.
However, that's sort of the point of having a blog, right? Especially a daily challenge-its all about taking a moment to slow down and actually write about the things rattling around in my brain.
And, yeah, I cheated yesterday, though this probably doesn't count as a real post either. At least until I admit this: Life is good. No, really. There are so many ups and downs, so many tragedies, so many reasons to be afraid....but, life really is an amazingly beautiful. Which leads me to...
Prepare thyself, ya'll: I'm going to blog about religion soon. Gird thy loins! ^_^
at March 14, 2011 No comments:

Note: Yes, I missed yesterday, but I am forgiving myself. I was at my uncle's house and someone crashed their car, thus causing a complete loss of cable service, including internet, starting around 7 PM last night. So, since I can blame it on someone else's a-a-a-alcohol use, I'm giving myself a pass. Also, recycled over on teachforus.
I really believe that the Praxis system is a load of crap. In case you are unfamiliar, here's my understanding of the basic certification process: first, every teacher must take the Praxis I. In a traditional teaching program, students are required to take the Praxis I at the beginning of their degree plan. From there, generally towards the end of their degree plan, teachers must take individual Praxis II exams. For example, I have to take 2 Praxis II, 2 hour exams: Elementary Education: Content and Knowledge and another one focused more on pedagogy. You may take both exams on the same day, but a lot of people opt to take them in stages. To become fully certified, teachers must also pass the third Praxis, where an official observes a teacher in the classroom.
However, they aren't the most effective tests, they are expensive, and they've become simply red tape.
I feel like I am pretty well versed at test taking, but I felt really uncomfortable taking a test without any prior knowledge or studying. However, pretty much every educator I've talked to has told me not to worry. At All. Turns out, they were right. The Praxis I was incredibly simplistic; I think a good test taking high schooler could do pretty well, but anyone who passes a few intro college classes should definitely pass. I just took the Content Knowledge Praxis II and (*knock on metaphorical wood*) I thought it was also easy; only the English section asked questions relating to actual teaching topics, such as language acquisition. To me, the Content Knowledge exam seemed redundant in a lot of ways to the Praxis I. I just don't see how these exams accurately predict teaching skill.
These three tests also cost about $150 each. A lot of people also spend an additional $30 on test prep because you must pass these tests to become a teacher. Because not as many students have to take the Praxis exams, they aren't given at as many places or as frequently as tests like the ACT or SAT. So, I've driven at least 2 hours for each of my Praxis exams, partially because of TFA's quick turn around compared to traditional teaching programs.
Of the people I chatted with during this round of Praxis exams, a large minority were already experienced teachers who had simply moved to a new state. After years of experience, not all of their certifications transferred, though some certifications would transfer. Other teachers simply wanted to gain certification in a new subject.
I'm not sure what would be a better system, honestly. I do think there should be a some kind of testing and a system of certification, just as we regulate the medical field. However, the current testing system is incredibly bloated. It doesn't make sense to test basically the same things in both the Praxis I and Elementary Content Knowledge. It doesn't make sense to require experienced teachers to shell out additional money and time for additional certification.
Of course, this all goes back to whether I am sufficiently prepared to teach even though I do not have a degree in education. Well....I think I will be by August, possibly more than the average traditionally educated teacher. But....I guess we will find out.
at March 12, 2011 No comments:

I am not going to give up the first day of Lent, no matter how tired I am! However, this isn't the most thought out introduction to what the achievement gap is to me. I am still thinking and learning about it through my TFA readings. I need to tell someone these things though:
(Quoted from my TFA required readings, page 19)
I can go on and on (and probably will) with the stats. I am from a poor, rural school. I had to leave my high school to get a good eduction, so I feel like I understand at least a little bit of what TFA is trying to fix. Education in America is in a sad state; yes, there are a lot of bight spots, (like TFA) but how did we end up letting so many students down, just because of their zip codes and parents' income? How are we going to fix it?
That's probably a question akin to "how does one eat an elephant?" One student, one school, and one bite at a time. Or, at least, that is my hope.
at March 10, 2011 No comments:

I never really know how to approach a blog. I mean, I have multiple blogs; inklingspot and teachforus are both about, well, me. How self-centered, right?
Okay, that's probably true. However, I've mostly wrote about crafting in this blog (hence the subtitle), and that's not really what I want out of this. So, I've decided to take a 40 day blogging challenge, mostly in honor of Lent. I want to write about the things that are currently chasing around my mind on a daily basis: things about TFA and the achievement gap, religion, graduation, the South, or really whatever is rattling around in my brain.
Yes, I realize this a public forum, probably more than a lot of people yapping on the internet understand. I also understand that you may not 1) agree, or 2) want to read my odd thoughts. And that is more than okay! Please feel free to comment or not, but please realize that this is just my thoughts at the moment. I don't mean to annoy or bore; just to talk about some of things that are important to me.
And isn't that the point of a blog? Besides, I am used to talking to myself in my journal, twitter account, and in the bathroom; might as well go for 40 days of blogging to (mostly) myself! ^_^
at March 09, 2011 No comments: