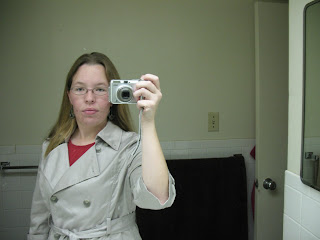 Me dressed up (!) really early one morning
I guess you'd probably guess I've become a youtube junkie if you've been following as of late. Unfortunately, college has been eating up a lot of my time. You see, there's this paper on Faustus (2 extensions later) that's making me want to look into the soul selling business, an epic end of term paper on Wicca that keeps getting longer and more complicated, a chemistry class that is kicking my butt, and two other classes that aren't that complicated,
just one more thing to do. I've also been struggling with financial aid and the bureaucracy of colleges. With all that said, there is a light at the end of the tunnel: Thanksgiving Break coming up and Christmas only 42 days away! 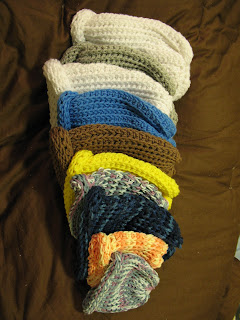 The hat addiction continues: 2 baby hats, 5 kid sized hats, 3 adult sized hats. One of which I really need to just claim as mine. Funny that I keep making hats but I don't have one! I should fix that. 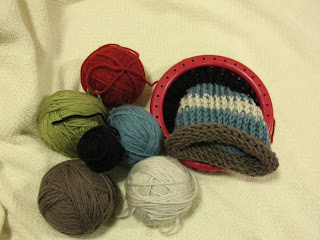 My current project is a long one: one of my best friends asked me to knit her a scarf for a Christmas gift. Sure, I thought. One thing though: she wanted a Doctor Who inspired scarf approximately 10 feet long. O.O I don't think I could ever knit something that long as slow as I knit, so I'm definitely loom knitting this puppy. She didn't care about the colors, thankfully, but I decided to check at Wal-Mart for some softer type yarns. Lo and behold, Wal-Mart now carries a limited selection of Vanna's Choice! This yarn is super soft, easy to work with, and now you can pick some up with the milk. It is on the pricier side of Wal-Mart yarn, (about $5 a skein, though $3.99 online) but completely worth it. The best part is all of the colors work really well together, so hopefully random stripes will look great on this scarf. I need to knit faster though!
at November 12, 2008

I have that trench coat w/ the three quarter sleeves.

I flipping love that trench! You obviously have good taste as well. ;-)

ahhh, you look BEAUTIFUL! and i am a huge fan of your knittings. there will be many warm ears and hearts this winter because of you and your talent. :D