My Dad, manly man that he is, has always been freaked out by those green tree frogs. I always thought of them as ninjas of the woodlands, clinging to everything, waiting for the right moment to attack. Or something. They are pretty sweet little slimy critters though, ninjas or not. 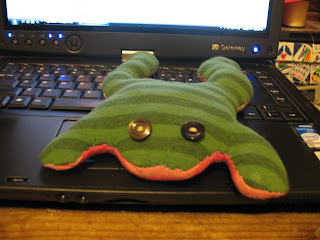 I made this little guy at the beginning of the summer out of old t-shirts. I am super surprised he turned out this well because when I printed out the pattern, I proceeded to mutilate it. I mean, if you look close enough, he's got a Finding Nemo inspired leg issue. I also failed to locate thread and ended up using blue embroidery thread. I love the little guy all the same, but hopefully sometime soon I can make him a less gimpy mate. 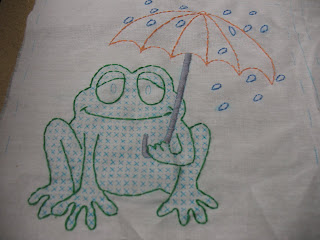 Mere weeks before my local Wal-Mart stopped selling crafty items, I bought a printed cross stitch sampler for a baby blanket. I bought a few skeins of embroidery thread and didn't worry too much about acquiring the rest of the thread. Which leads to this freakily eyeless frog in the rain. Fast forward a year or more, I finally bought the remaining thread at Marshall's Fabric Store. I've finished quite a bit more on these, probably because I cross stitched at Six Flags and other weird locations this summer, so I might someday finish this quilt. Maybe.
at August 26, 2008 No comments: 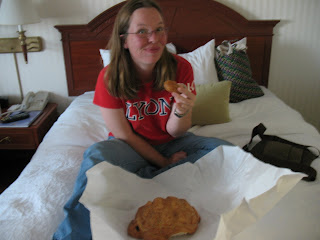 They turned out perfectly. I learned that bread is indeed the most magical of foods, forgiving and beautiful in its many forms. Its comforting and peaceful and its a food that everyone, no matter the culture, can find something to love. Of course, I also learned to always check the expiration dates.
at August 22, 2008 3 comments:

I once changed my major on a flip of a coin, and I feel a lot like that about this decision. In about a month, I've applied and deposited to a new college. I'm leaving the big university for a private religiously affiliated college. I started out with about 18,000 classmates and will now have 500.

You, gentle reader, may be inclined to ask me why I would make such a drastic change in so short of time. You might also want to inquire on my mental health and if you over the age of 55, you may want to know what my PLAN might be. Because I must have a PLAN.

Well, I do have a plan. Sort of. I want to enjoy my undergraduate degree AND finish it, whatever it ends up being. I really want to indulge my need to craft and volunteer. I want to be a Big Fish again. I want to be closer to my family. I want to go to graduate school. And maybe rule Cuba one day. Just kidding.

I've decided in the last month that I'm okay with a little debt. The Boy has been supportive (as always) and I believe that this decision is in my best interest. I think.

And that's how I decided to transfer. I'm scared, of course. New place, new faces. Probably a new major. Maybe it will work out. Hope so, anyways.
at August 08, 2008 2 comments:

Well, I made it back to The Homeland from the wilds of California. It was an awesome vacation that deserves a full post. I also should post about my transferring colleges and my latest crafty plottings. Maybe tomorrow.

But first, you may have noticed something different about this blog. (Okay, probably not, but maybe you'll actually leave google reader to check out what changed. Like, now.) The Boy worked some tech god magic and made this blog an honest to goodness website, making up for being gone most of the summer. Isn't it gorgeous? I'm probably a little partial, but I think its great. Its a little creepy/amusing that he could do that without me knowing, but hey, not complaining.

I feel really behind on most of my projects, but I did get about half of my school shopping done today. I now have bras, blue jeans, and a new backpack (notice the order of importance). My family always gets those sorts of items on the cheap at a Vanity Fair outlet in Missouri in one big shopping trip. As much as I hate to admit it, I actually followed those silly fashion magazines advice and got all dark wash and straight legged jeans for this year. They are all FREAKING awesome; I'm in love. However, my jeans were between $5 and $22. So they can basically suck their fashion advice because I did it better. So there.

School shopping is one of my absolutely favorite activities. I CAN'T WAIT until I can rip open a package of G2 Pilots and slip them into my fabulous pencil case next to a brand spankin' new notebook....Ah. So good. Even better, my new backpack? Its brown on the outside and bright blue on the inside. Same colors as my senior prom dress and backboard for my science fair project. Its a good omen.
at August 07, 2008 2 comments: